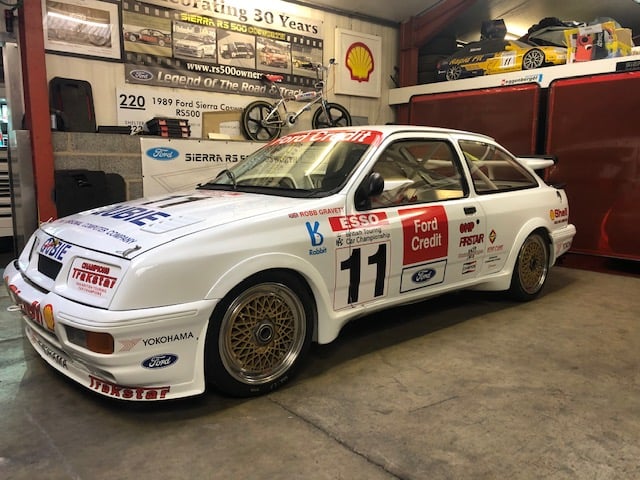 Your chance to own a very special Group A RS500

This very special car was built to win ,and it sure did that, with the most impressive of results in its first year of racing in the BTCC, the results speak for themself

This very special car was built by Trackstar (owned and run by Robb Gravett and Radio one DJ Mike Smith) to run in the 1990 season .

There idea was a brand new car would be quicker than there 1989 cars that were originally built in Australia in 1987 by the Aussie legend Dick johnson. These cars were showing signes of regular use , so they decided to start a fresh but copied the very well built DJR sierras as they were proven winning cars with great design and the best parts available (Eggenberger suspension etc).

There idea proved to be a great one as Robb was unstopable as the results prove and repaid them well with a great drive by Robb taking the only championship win in an rs500.

This car was also taken to Macau and raced by Robb in the “Watson” livery, Robb started in P2 but sadly had to retire.

Later that year the car was again changed into the “Napolex” livery for its atempt on the Fugi 500, where the car started in P8 but again sadly retired after 21 laps.

At the end of 1990 the rules changed and the big power turbo cars were no longer eligable to run in the 1991 season and so the car was sold to Mountune boss, David Mountain .

David had a great fondness for the car as he played a big part in the success of the wins as it was Mountune who supplied the engines for this great car. So when the chance came to own the car David jumped at the chance and quickly snapped it up.

The car lived in the Mountune workshops proudly displayed until one of their customers from Italy paid a visit to discuss engines for his cars raced back home. The customer noticed the car and after a lot of arm twisting made David an offer he couldnt refuse.

The car was converted to LHD and shipped over to Italy where it raced in the Superturismo S1 class in 1992 in the Master Sportswear livery .

The car stayed in Italy until finally returning to the UK in 2014 when it was purchased by specialist car dealer Mark Donaldson.

Mark set about restoring the car by converting it back into its origninal RHD and the white with Ford Credit livery.

Mark sold the car through Silverstone auctions in 2018 to McClaren CEO Zak Brown . The car then went through a full Mechanical rebuild , Inc a ” No exspence spared ” Mountune engine , gearbox ( Getrag ) and 9″ Motorsport diff rebuild , all other componants were either rebuilt or replaced with period correct brand new items.

The car was inspected and has recently been issued with Full FIA historic papers , so is eligable to race in all the historic series throughout the world.

I have many pictures of the car and have more details and history that is simply to much to list , so if you are looking for the best BTCC rs500 to come to the market in recent years and fancy racing this icon or simply would love to add this to your collection then please feel free to contact us to arrange an appointment to view .

This iconic race car is on the button and ready to race .